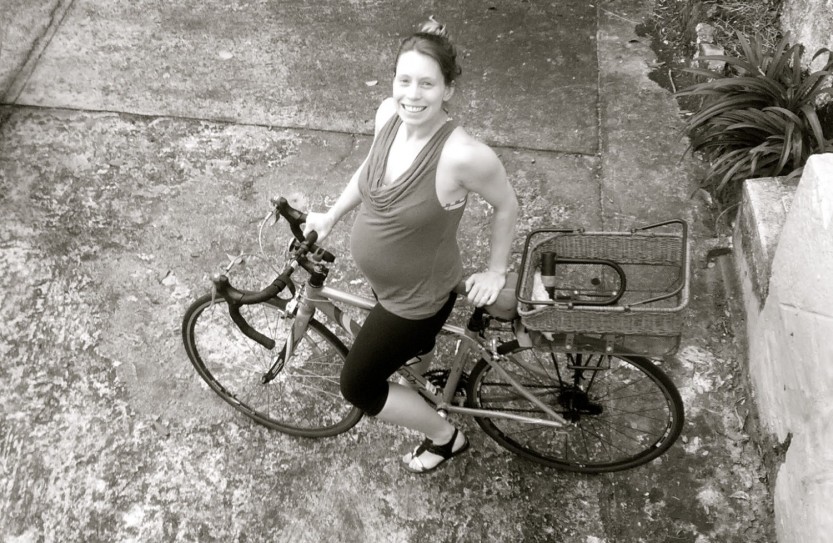 Here I am, 35 weeks pregnant and only a few more weeks until our daughter’s arrival. To be honest I never thought I would be rock climbing at this stage of my pregnancy.  Like a lot of people I always thought of pregnant women it must be hard to carry all of that extra weight as if they were some kind of poor, fragile little thing.

Luckily I don’t feel fragile at all. I do appreciate being able to sit down on public transport and to receive a little help but overall I am surprised to feel like myself despite this 35-week belly that keeps growing and growing… I am just a little slower, that’s all!

Slowing down a bit

The beauty of being pregnant is that I don’t even have to think about slowing down. My body does it by itself; it’s simply impossible to be as fast as I used to be and I don’t even notice it. I realised I was much slower at 28 weeks after I cycled from home to catch the ferry one morning. Normally I can do it in about 10min but that morning as I was approaching the wharf I saw the ferry leaving the dock and well on its way to the CBD… Damn it! I did not realise how slow I had become.

Being slow is fine. I accepted that long ago. Feeling heavy and big is a little more annoying though. But exercising is definitely helping me to keep feeling light – as much as is possible – and to get rid of the unpleasant feeling of “being too full” – you know how you feel after a heavy Christmas dinner. It’s getting harder and harder to get out of the house to do any type of exercise but I do it because I can’t afford not to feel good. Unfortunately – and unlike my fellow pregnant friends in Québec who can enjoy a generous full year of paid maternity leave – I don’t have access to any kind of maternity advantage as we are not yet permanent residents in Australia. We rely on our savings and so I have to work as long as I can until the baby’s arrival. I am also thinking about the post-pregnancy emotional and physical stuff. In other words I see exercising as a long-term investment; I don’t have a choice but to be in the best shape possible.

Week 26 to 28 : Climbing slower and other type of exercises

From week 26 to 28 I did not climb outside – more because of time restrictions than the pregnancy. I did go to the climbing gym a little but not as much as I would have liked to. During week 27 I started to notice a lot more Braxton Hicks contractions. I have had them from 16 weeks onwards. They have become much more frequent and stronger than before and it made me worried. My workout consisted on a bit of cardio on the elliptical machine, bush walking, cycling, some push-ups, and weightlifting, and a lot of core workout – all kind of planks, my favourite. I notice that when working out those Braxton Hicks contractions were coming and going especially during my core workout or fast walking. I called the midwife and she didn’t seem worried at all “as long as they are painless and not regular”. I didn’t really know what to think of these “practice contractions” but they became less frequent as soon as I hit 28 weeks and with rest and good hydration they almost disappeared.

26 to 28 weeks was not my best time. I felt tired, big, and as if there was no more space for the baby to grow. Despite people telling me how small I was I could definitely feel a growth spurt which felt horrible and made me feel claustrophobic in my own body. At 28 weeks I was feeling much better, used to my new and now bigger belly. One thing that was getting worse though: my bladder was the size of a pea. It is really annoying when you have your harness on and are ready to climb and… you have to run to the loo. Fortunately, the full body harness makes it much easier to pee without taking everything off. I was surprised not to notice any significative change in my climbing other than being heavier.

Between week 29 and 33 I had two weeks off from work, which was more than welcome. As a French teacher for young children I found my work quite demanding. It requires me to stand up and down, bend my knees, have a constant high level of energy, carry a lot of bags full of props around, be happy and motivated, be patient at all time, and deal with groups of happy (or not so happy) and excited kids. Yep, work and commuting were the most demanding activities I was doing at that stage and much more difficult than exercising.

From day one of my holidays I decided to focus on myself, breathe, and catch up on sleep. I went to the climbing gym a few times; tried to start my mornings with fast-paced walks, and lots of yoga. I found bushwalking/hiking the most pleasant and efficient thing to do. I was surprised to feel no different than usual except that I can no longer do torsion movements. Using my abs was different too. I could feel some uncomfortable burning in my upper abs and crunches became no longer an option. Strangely the most difficult thing for me was to deal with other people’s looks: whether or not they are positive or negative glances, I don’t really enjoy being the centre of attention. I figured out that I had to get used to it as people seem fascinated by pregnancy and a little surprised to see a pregnant lady exercising. I have to say it must be weird to look at me awkwardly dismounting my grocery-laden bike with a big belly in the way or putting my full-body harness one leg at a time wobbling from one side to the other…

Climbing-wise, I did not felt the effect of the hormone relaxin on my joints nor the effect of “change in centre of gravity”. According to my pregnancy lectures and my doctor I should have felt a change in gravity at that stage. Perhaps my belly was not big enough or my core muscles were still doing their job but I did not feel that change. So I kept climbing at the gym, cycling, and walking as much as I could with no significative difficulties other than carrying more and more weight.

What the doctor said

When I started my 3rd and last trimester I made sure to ask my OB if there was anything I should stop doing sports-wise. Her advice was straightforward: not at all! She did confirm that crunches were better off the menu and advised me to get plenty of rest. With the Australian summer around the corner I would say that climbing outside when it’s over 30 degrees C will become difficult. Hydration is an absolute must and even when walking to the grocery store I never leave the house without my water bottle. I am seriously sweating these days! Of course that implies that I know every single public toilet on my way. But really I don’t see why I should change my regular workout. At this stage I am trying to enjoy every single moment spent with my Amoureux going to the gym together as a couple whenever we feel like it. I know it won’t be long before we can’t escape the house on a date just the two of us and I want to make the most of that time before we become a family of three. For now it is a very exciting time, still in our bubble in anticipation over this strange thing that is happening in our lives, watching every single move that comes across my belly, listening to every single hiccup that the little alien makes.

One thought on “Climbing Pregnant and other exercises in pregnancy: part 2”